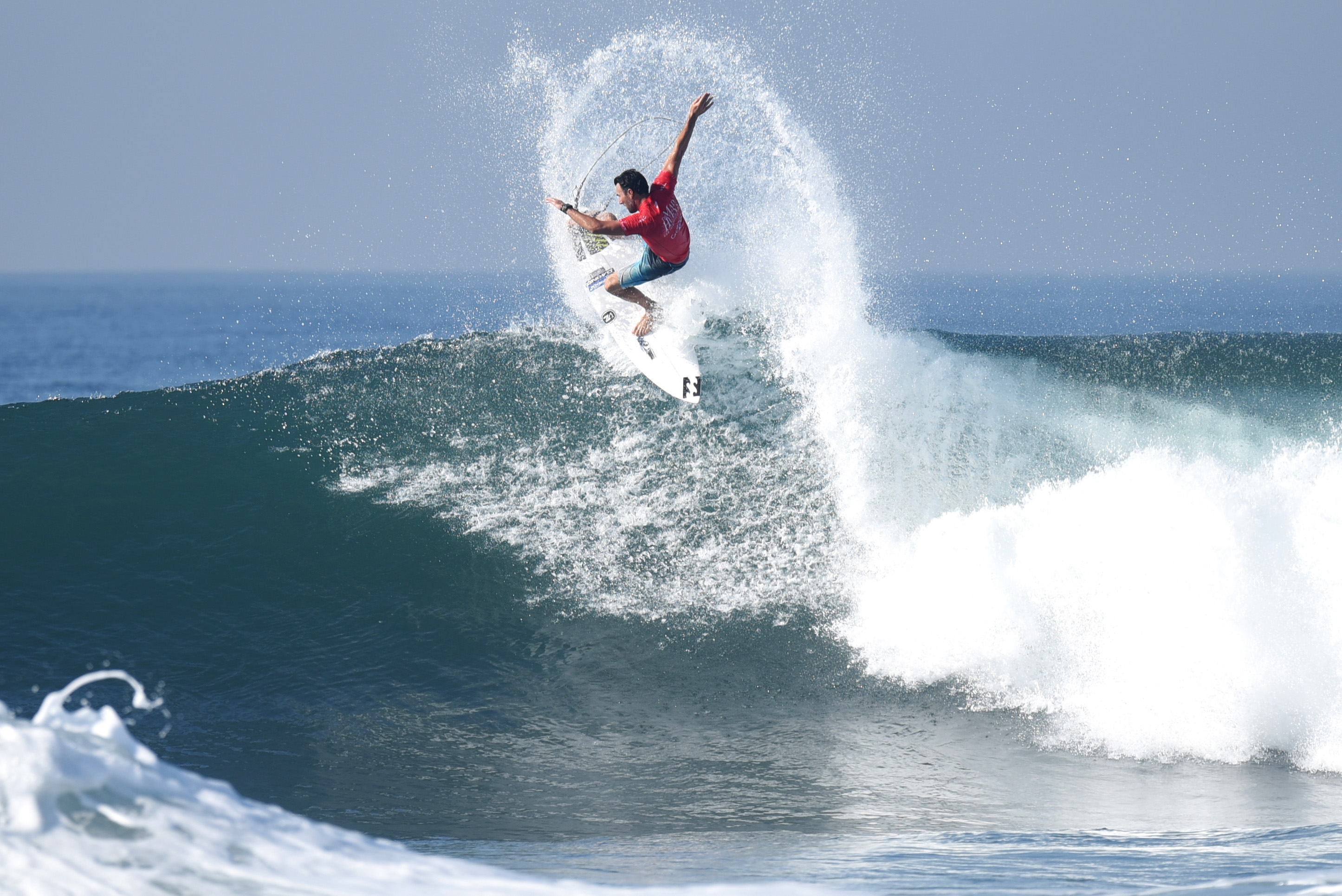 Caption: 2012 World Champion Joel Parkinson back at the place where he made history with a perfect heat in 2013: WSL/Bennett

(Keramas Beach, Bali Indonesia: Thursday May 5th, 2016): As Round 2 of the Komune Bali Pro Presented by The Mad Hueys continued and brought with it some of the biggest names in competitive surfing history. With an illustrious list of competitors ready to take to the water, the mechanical high performance machine of Keramas turned on yet again with four-to-five foot clean waves churning down the reef in another massive day of action.

In 2013, Keramas held a stop of the World Surf League (WSL) Championship Tour (CT). 2012 World Champion Joel Parkinson won the event and along the way made history by surfing a perfect heat (scored 20 out of 20) something only a few have done. Today he made his competitive return to Keramas and although he didn’t achieve complete perfection he was still able to score a 9.00 (out of a possible 10) and a 7.00 for a heat total of 16.00 with his timeless smooth arcs and amazing ability in the tube to easily progresse through to Round 3.

“It is so fun out there – such a sick wave,” Parkinson said. “I forgot how good this wave is for a contest it’s almost made for it. I feel like I really know this wave really well and know which waves to take. I’ve been as excited to get here for this comp as any CT event. It’s just such an amazing place.”

Another CT surfer who has a long history with the wave at Keramas is Taj Burrow. Burrow has etched this spot into surf fans brains everywhere with some of the most mind boggling movie clips ever recorded taking place here. The 2015 event champion’s love affair with the right-hander continued as he posted a solid heat total of 15.25 with a display of carving turns and fin-busts to take the heat win.

“I’m really excited to be back at this event – it has such a good vibe,” Burrow said. “I’ve got my family here and it’s so much more relaxed than a CT so I couldn’t be happier. This wave is up there in my favorites list, it’s been a really significant wave in my career. I’ve been shooting photo’s and films here for so many years, it’s just got everything, barrels, high performance sections, it’s crazy.” 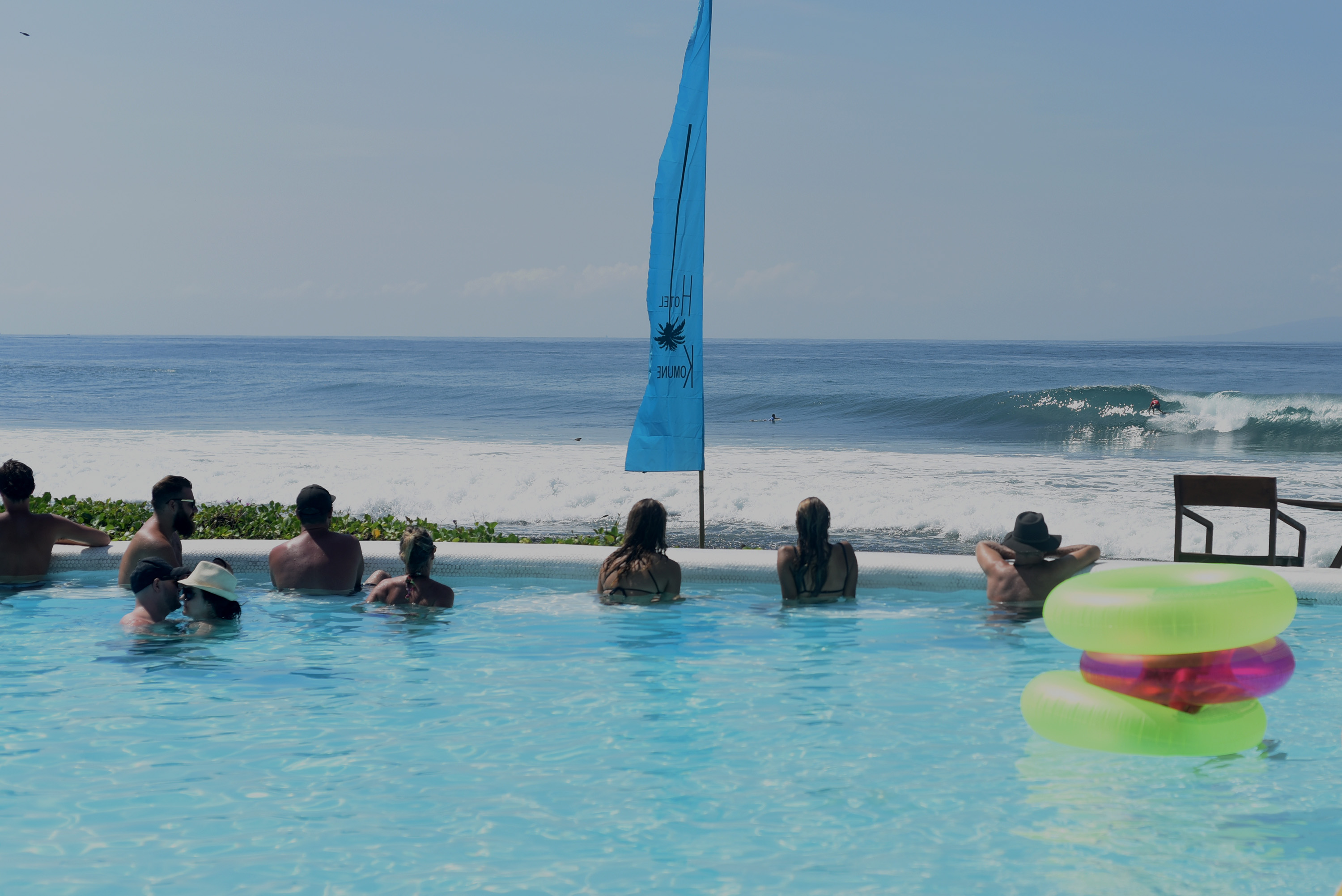 Heitor Alves was a member of the WSL CT for a number of years and his competitive instinct has not been lost. The progressive Brazilian only needed two waves to show the judges his sharp backhand attack and was rewarded a heat total of 12.25 in what was one of the less consistent heats of the day for waves.

“I was hoping there would be more waves in that heat so I could surf more,” Alves said. “I’m happy I made that heat though so I can keep surfing out here. I came here ten years ago so I’m glad to be back. I hope I can get some barrels in my next heat.” 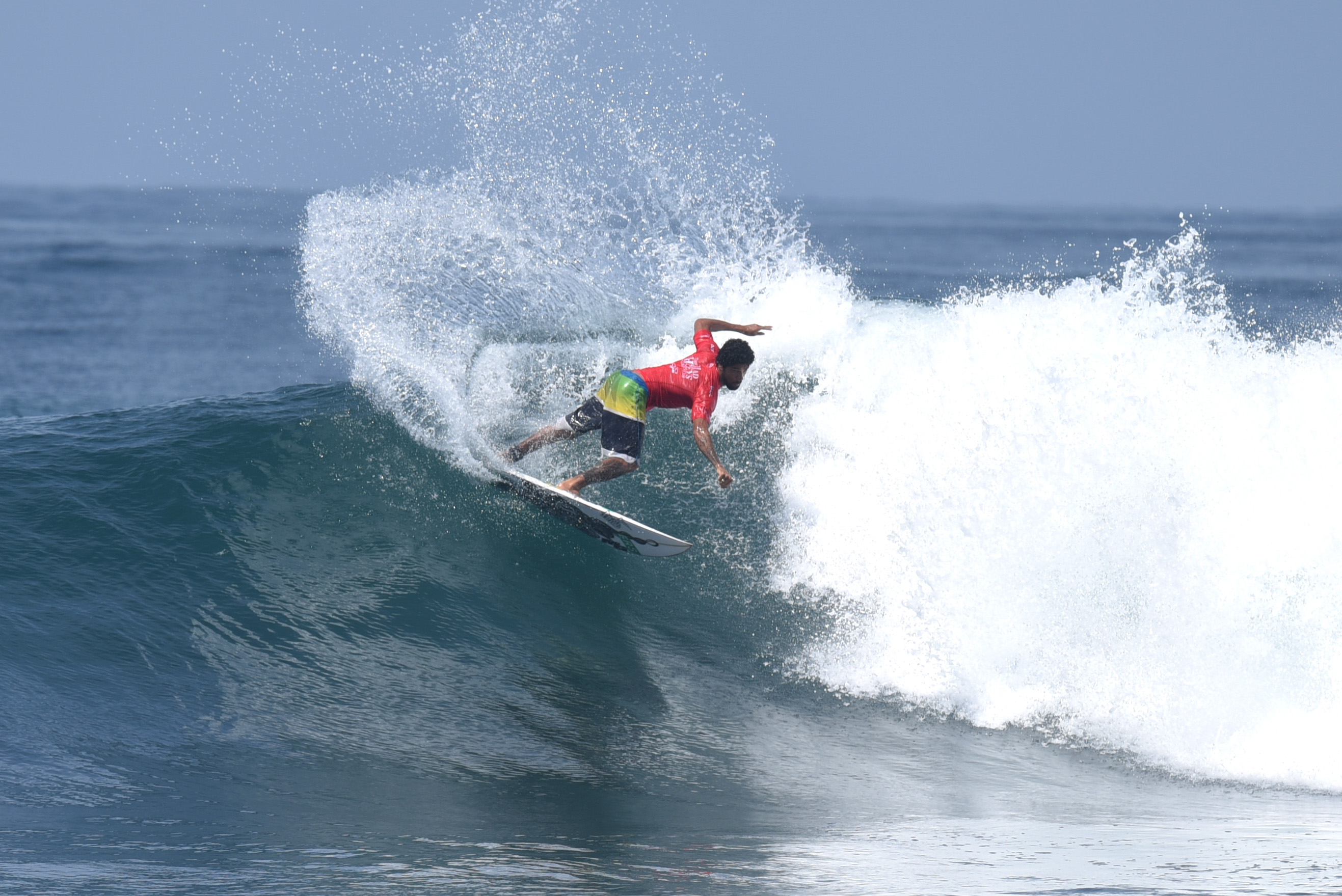 In the final heat of the day, Hawaiian powerhouse Ezekiel Lau paddled out and displaced more water than a monsoonal cloud. Lau used his big frame to belt a number of huge layback snaps

“I travel around the world all year competing in events that are held in pretty average waves so to come here is a real treat,” Lau said. “I’ve wanted to compete at this event for the last few years but have had other things on, this year I had a gap in my schedule and wasn’t going to miss it. Being able to get heat practice in and surf this wave at the same time is awesome. This is a sick event.” 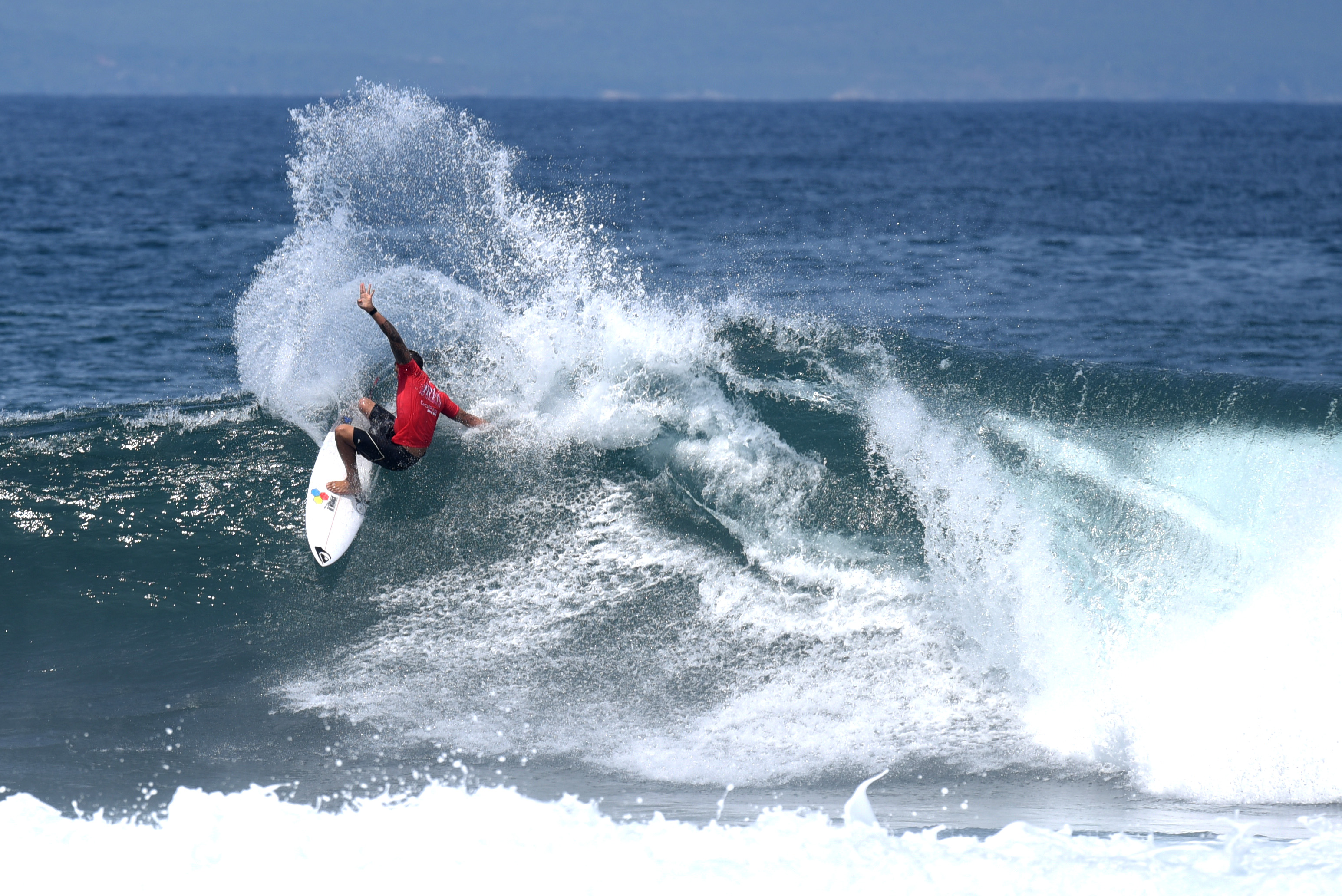 One of Indonesia’s most successful competitive surfers Oney Anwar showed that he is one to watch on home turf. The young natural-footer from Sumbawa found a number of nice barrels coupled with some huge turns and even aerial maneuvres to post a heat total of 14.50 and win the heat.

“That was a really good heat for me,” Anwar said. “There were lots of waves and it was so glassy and clean. When you get the right one out there it’s like heaven. I’m so stoked to be back at Komune and surfing Keramas with three other guys, I feel really lucky.” 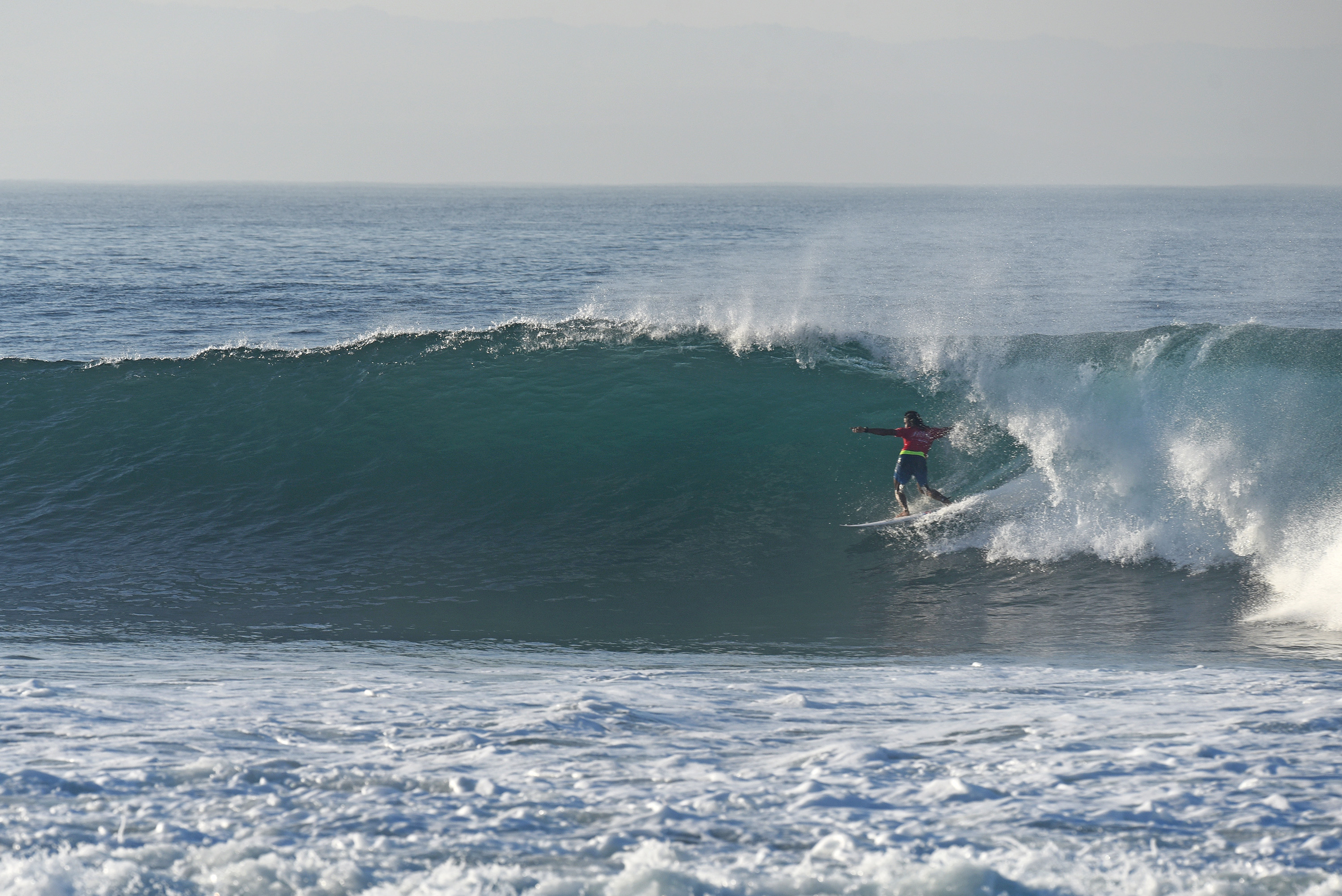 Caption: Oney Anwar spreading his wings behind the curtain: WSL/Bennett

Even with all of the superstars through out the draw, it was a lesser-known name that impressed the judges the most. Shane Holmes from the New South Wales Central Coast scored the first 10-point-ride of the contest with two throaty barrels on the one wave. He backed it up with an excellent 8.50 for an impressive heat total of 18.50, the highest of the contest so far.