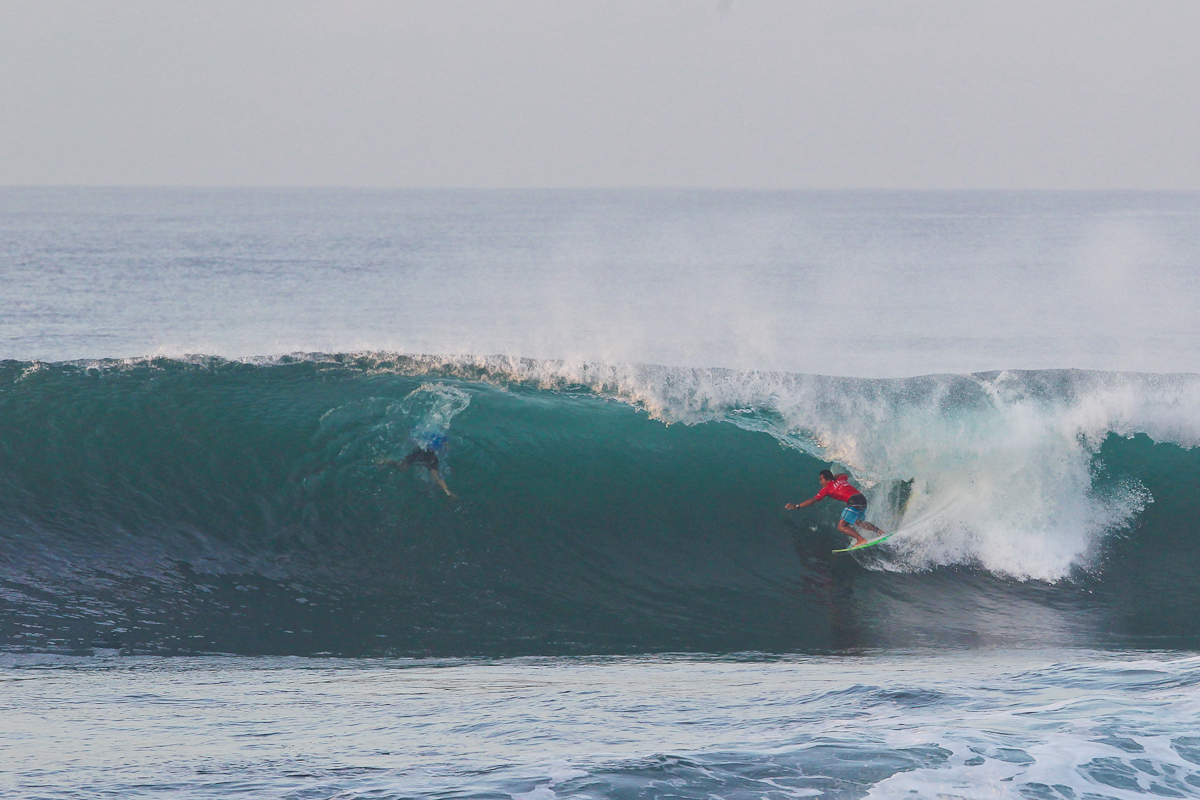 Caption: Dede Suryana threading a morning tube at Keramas to score an 8.75 : ASC/Hain

(Keramas Beach, Bali Indonesia: Wednesday May 4th, 2016): Competitors have been greeted once again with epic clean conditions at the perfect right-hander of Keramas on Bali’s East Coast on Day 2 of the 3rd annual Komune Bali Pro Presented By The Mad Hueys. With the afternoon on-shore staying light until after lunch, contest directors were able to sweep through Round 1 and the first four heats of Round 2 with the rest of the top seeded Round to continue tomorrow.

The first heat of the morning was action packed with the high tide pushing in solid four-to-five foot waves, Javanese surfer Dede Suryana continued his great form from last week’s Mentawai Pro where he finished runner-up. Suryana displayed his amazing skill in the tube to post the highest single wave score of the Round, an 8.75 (out of a possible 10) when he took off deep in one of the bigger, hollow waves of the morning.

“The conditions are beautiful this morning,” Suryana said. “This size is perfect for Keramas but it’s a bit shifty so you have to be in the right spot. Lucky for me I was in the spot twice and got some nice barrels. After surfing Lances Right in a QS 1,000 then coming here and getting more epic barrels the next week in a similar contest, it’s amazing.” 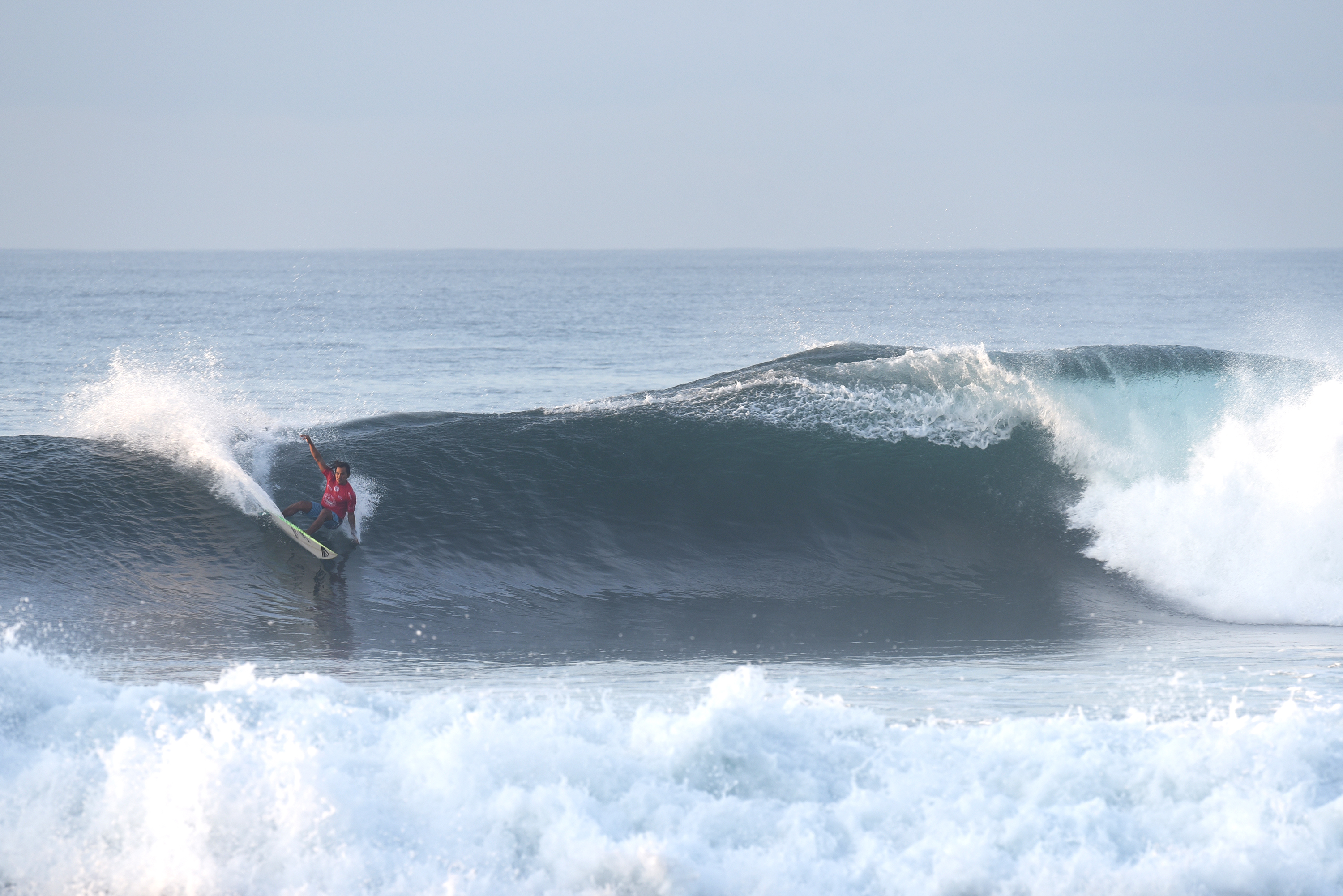 Caption: Suryana showing the judges that barrel riding isn’t all he’s good at with a massive carving hack: WSL/Bennett

The incredible high performance potential of Keramas was brought to the attention of the world when the Irons’ Brothers logged some of the most memorable movie clips in surfing history at the now famous reef-break. In a rare competitive appearance, Bruce Irons paddled out in Heat 6 of Round 1 and went to town on a solid set wave, landing a floater on a section most wouldn’t dare to attack. Unable to find a back-up, Irons only just progressed in second place behind young Australian Ryan Slattery.

“That heat didn’t feel too great waiting for waves,” Irons said. “I love this wave it’s so fun and rippable, it doesn’t really feel like a contest. Once you get out there and people are jostling for position I start to get revved up. Even when you’re not in a contest your always competing for waves so I feel I’ll always have that fire in me.” 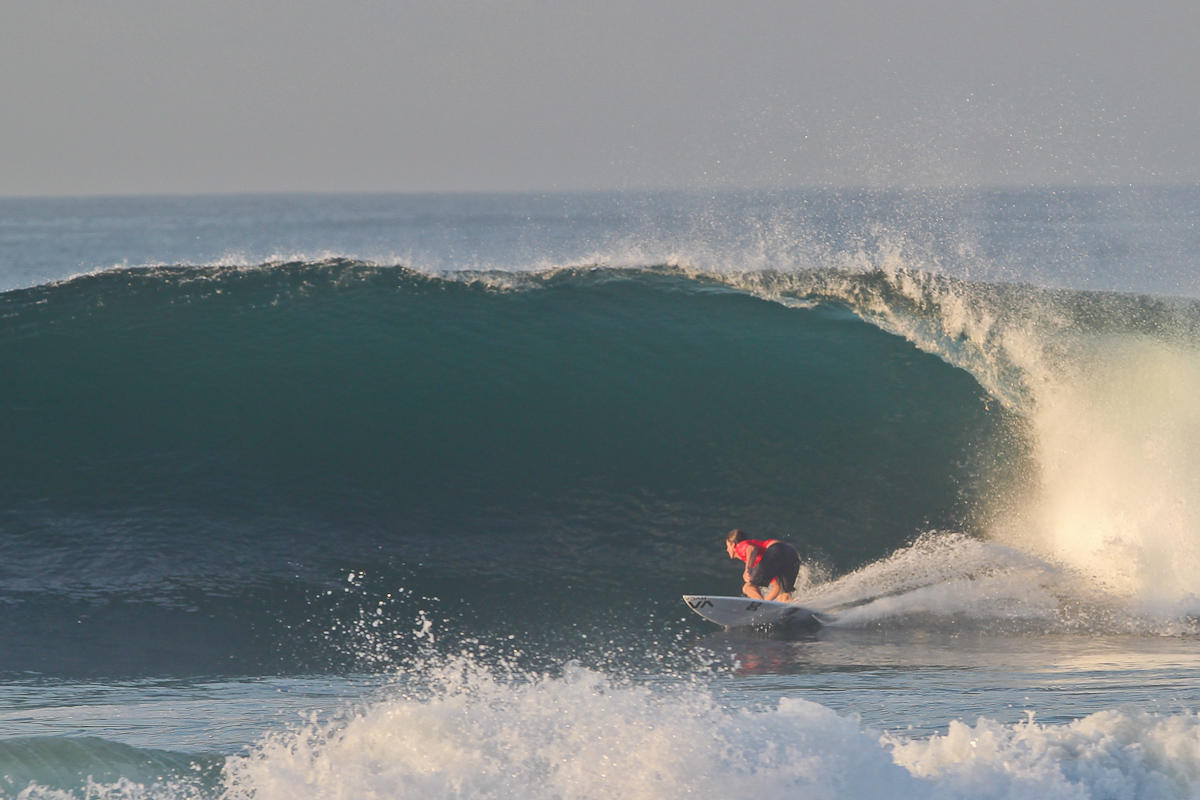 After recently taking out the 2016 Australasia Junior Qualifying Series (JQS), last year’s Komune Bali Pro runner-up Ethan Ewing is on an absolute roll this year. In his Round 1 heat where he waited patiently until finding two scoring waves in a row to post a solid heat total of 14.35 and move into Round 2.

“That heat started off a bit slower than I would have liked,” Ewing said. “I like to get busy early and have my scores locked in, but the ocean didn’t allow it that heat. I’m looking forward to this swell coming – we could get really pumping waves. At any size though this wave is just so good.”
Tristan Forras (Torquay, VIC) continued the good form of the goofy-foots taking out his Round 1 heat. Forras tried to minimize his own expectations at this year’s event and it seemed to pay off with the Victorian easily winning his heat with some impressive fins free maneuvres. 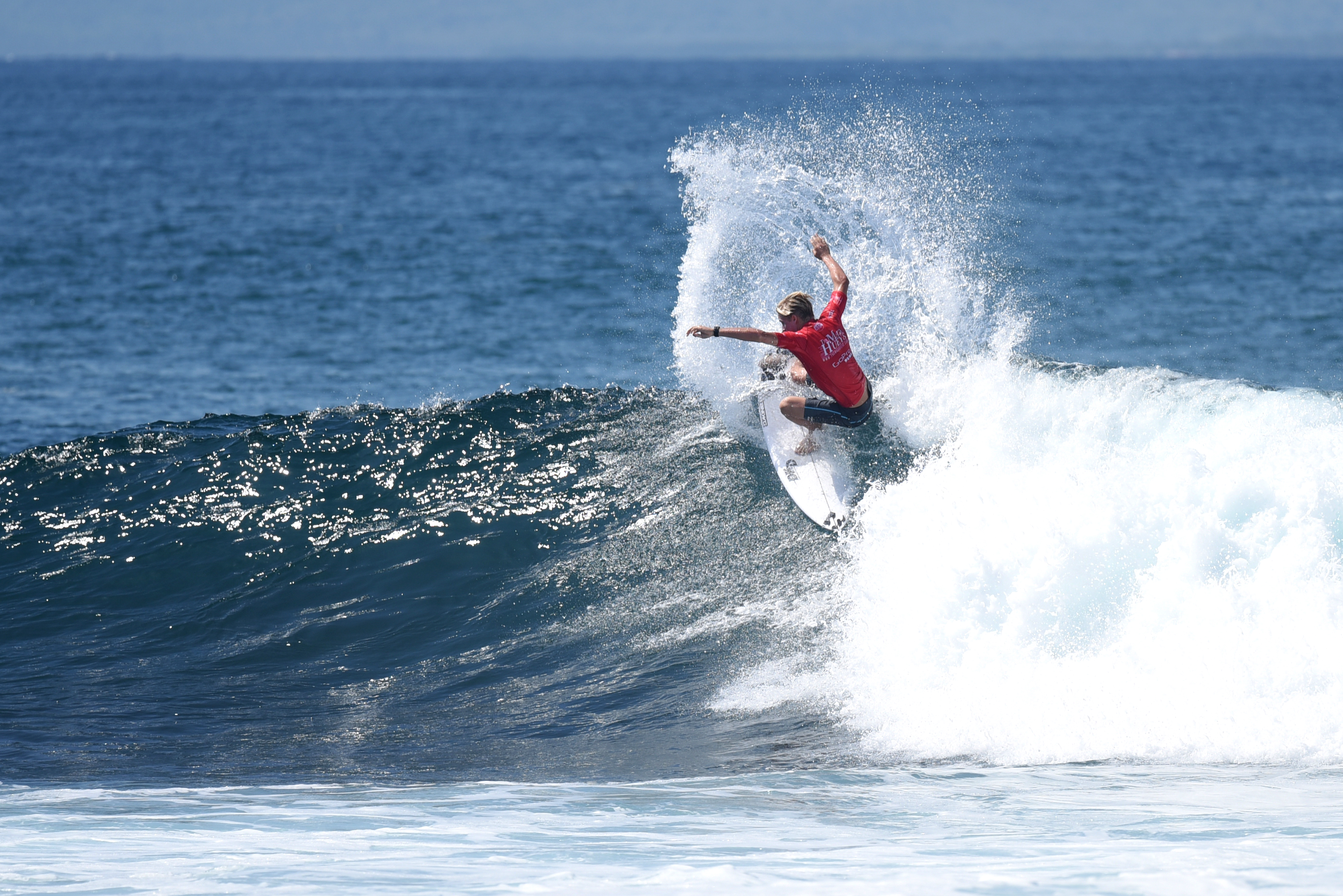 Another competitor with a small amount of experience at Keramas is young Kiwi Mackenzie Bowden. Bowden got into a good rhythm during his heat to take the win with a total of 12.05. This rhythm is something he has been finding hard to do during the free-surfs.

“I was so over excited at the start of the heat,” Bowden said. “It’s such an amazing wave I didn’t really know what to do then lucked into that first good one and scored a 7.00. It’s been busy out here so I’ve been getting up at dark and paddling out to try and get a wave to myself. I’m glad to be able to surf another heat out here, hopefully I can get some good ones.” 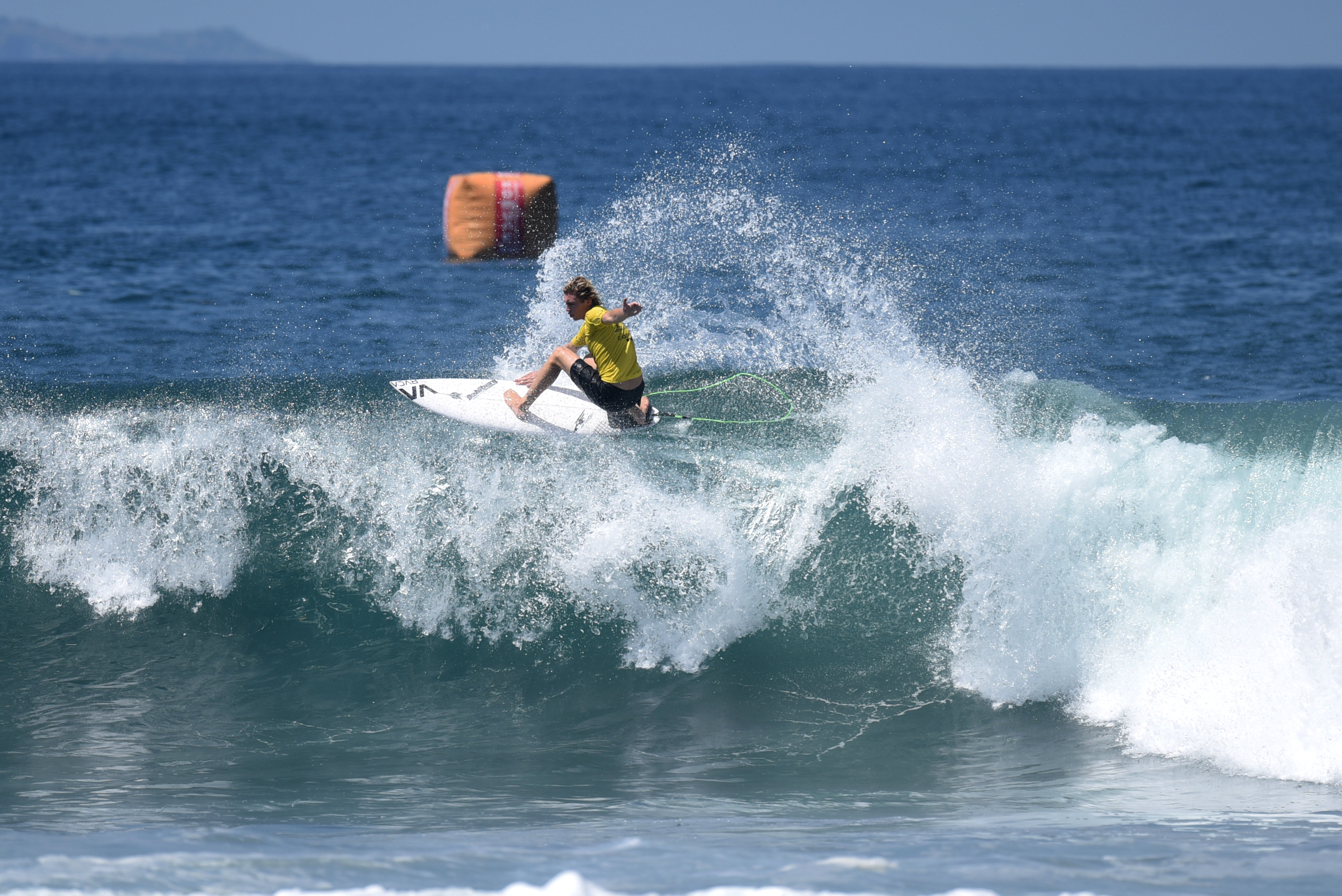 As the clean conditions continued, contest director and former Championship Tour (CT) surfer Dean Morrison called Round 2 on for 4 Heats. The first time director showed his call was worthy as he paddled out in the first heat and dropped the highest heat total of the contest so far an 16.40.

“I don’t feel pressure to call it on – probably more so to call it off,” Morrison said. “I know the waves are going to be really good in the morning so it was tempting to wait until then but the waves now are still good so it was an easy choice.” 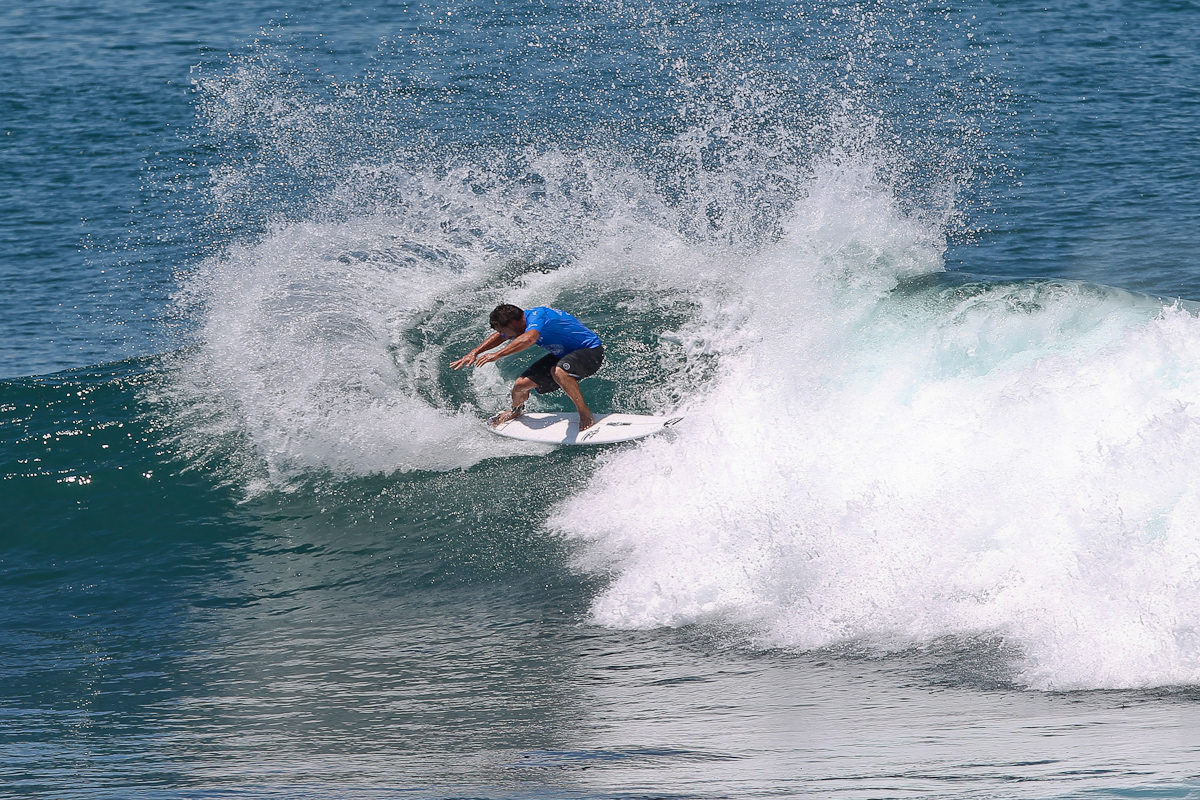 In one of the final heat of the day, Teale Vanner found himself in a tough position needing a mid-range score to take him from 4th into the 2nd qualifying position. Vanner waited patiently until a he found a medium sized wave deep on the reef. Knowing he needed a big score Vanner threw a number of massive turns on a wave he rode to the beach. His patience and commitment were rewarded as he was scored an excellent 8.90 which moved him from last to first for the heat win.

“I definitely left it ‘till the last minute,” Vanner said. “Towards the end of the heat I noticed that no one was getting over a 7.00 so I knew if I just lit one up I would get a score that was better than my backup. My first two turns felt good then I was just trying to milk it to the end.”