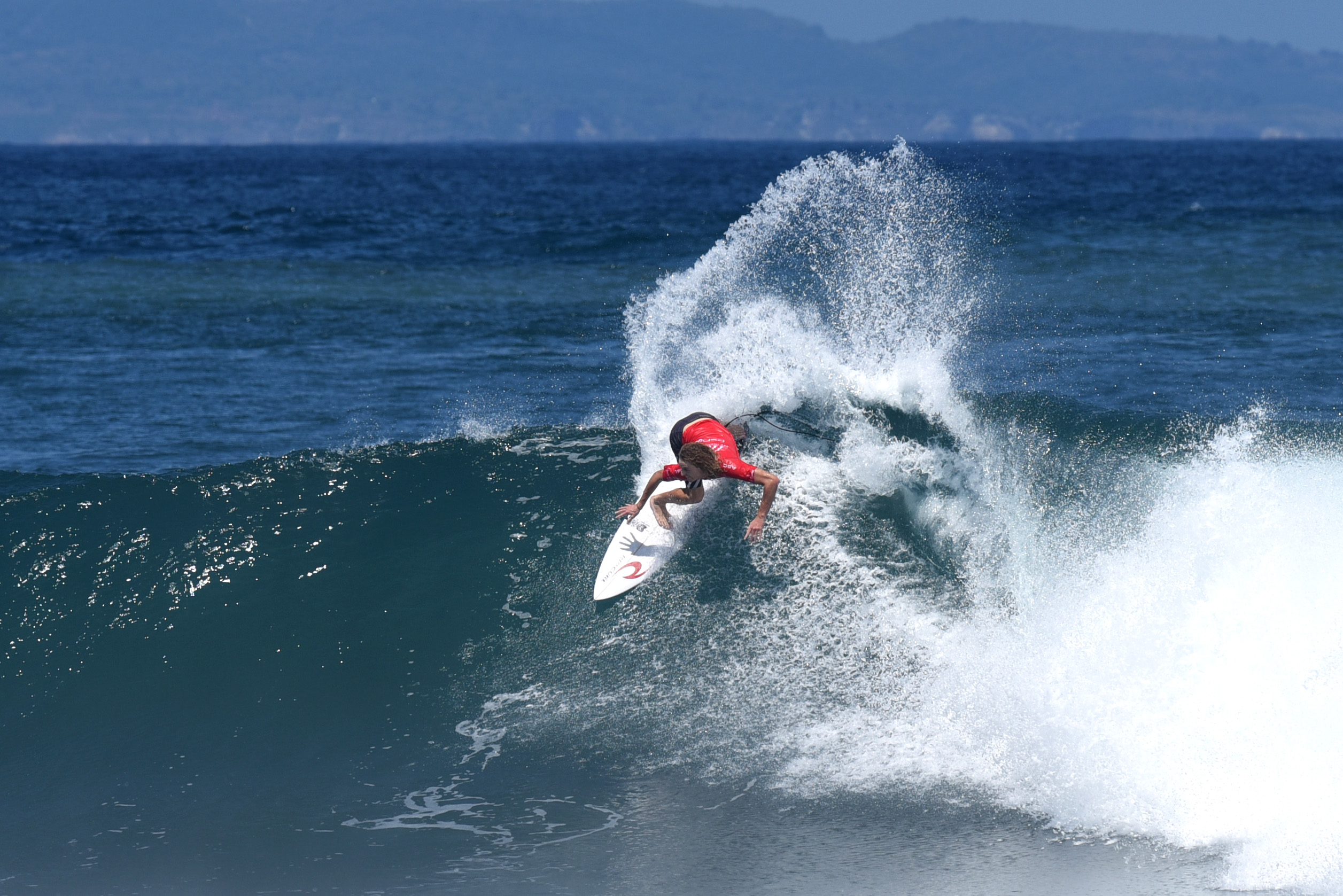 Caption: Luke Hynd posted the highest single wave score of Round 1 so far, a near excellent 7.75 (out of a possible 10) in a morning dominated by goofy-footers: WSL/Bennett

Day 1 Just A Taste Of The Action Expected at Komune Bali Pro pres. by The Mad Hueys

(Keramas Beach, Bali Indonesia: Tuesday May 3rd, 2016): Day 1 of the third annual Komune Bali Pro pres. by The Mad Hueys got underway today in clean four-to-five foot waves at perfect right-hander of Keramas. This wave on Bali’s East Coast is world renowned for producing high performance waves, consistency offering up tubes and sections for critical carves and massive aerials. Event organisers ran through the trials and 4 Heats of Round 1 and have sights set on a big day tomorrow that will see some top seeds hit the water.

Taking out the trials was 2011 Masters World Champion and former CT competitor Nathan Webster who battled through 3 heats in a busy morning. Webster posted consistent scores to progress through into the main event for his first competitive appearance since the 2015 Komune Bali Pro.

“I surfed three heats this morning and made it through so I’m pretty stoked on that,” Webster said. “Last year’s event was the last time I competed at all, but it wasn’t very hard to find my competitive drive. When you have competed for as long as I have the fire never really goes out. I really enjoy the opportunity to compete especially here at Keramas.” 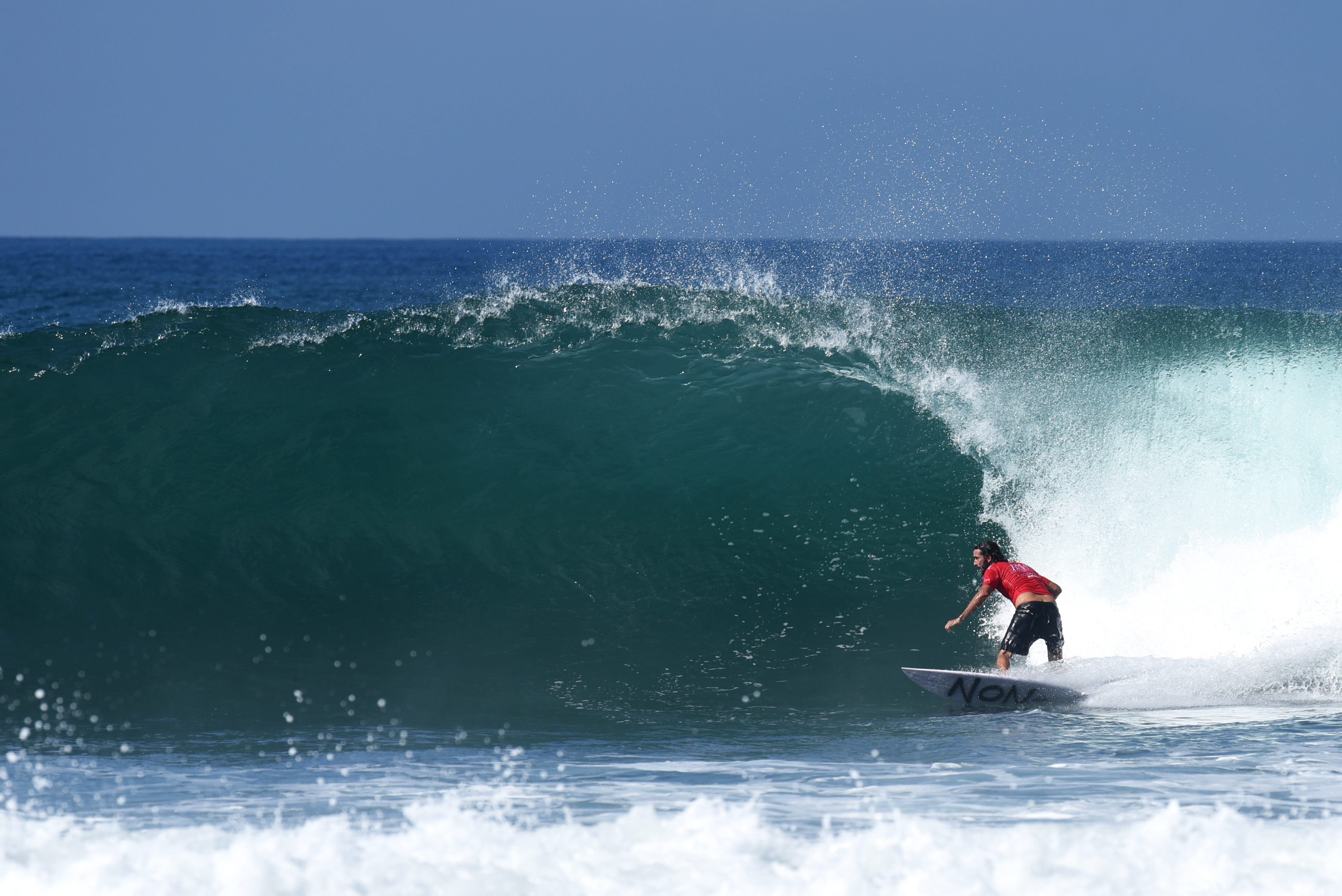 Mad Hueys team-rider and goofy-foot powerhouse Nick Vasicek played a patient game in his Round 1 heat only catching three waves. In his third year at the event, Vasicek’s sharp rail attack saw him post an impressive heat win and book a spot in the next Round where he’ll face fellow Gold Coasters Brent Dorrington and Dean Morrison plus local surfer Made Darma Yasa.

“It’s great to be back here at such a fun event,” Vasicek said. “The forecast looks great so I’m glad to make it through that heat and hopefully get some of this swell that’s on its way. Either way, surfing Keramas with no one out is so good. Going blow-for-blow with Joel Parkinson or Bruce Irons in pumping barrels would be pretty amazing.” 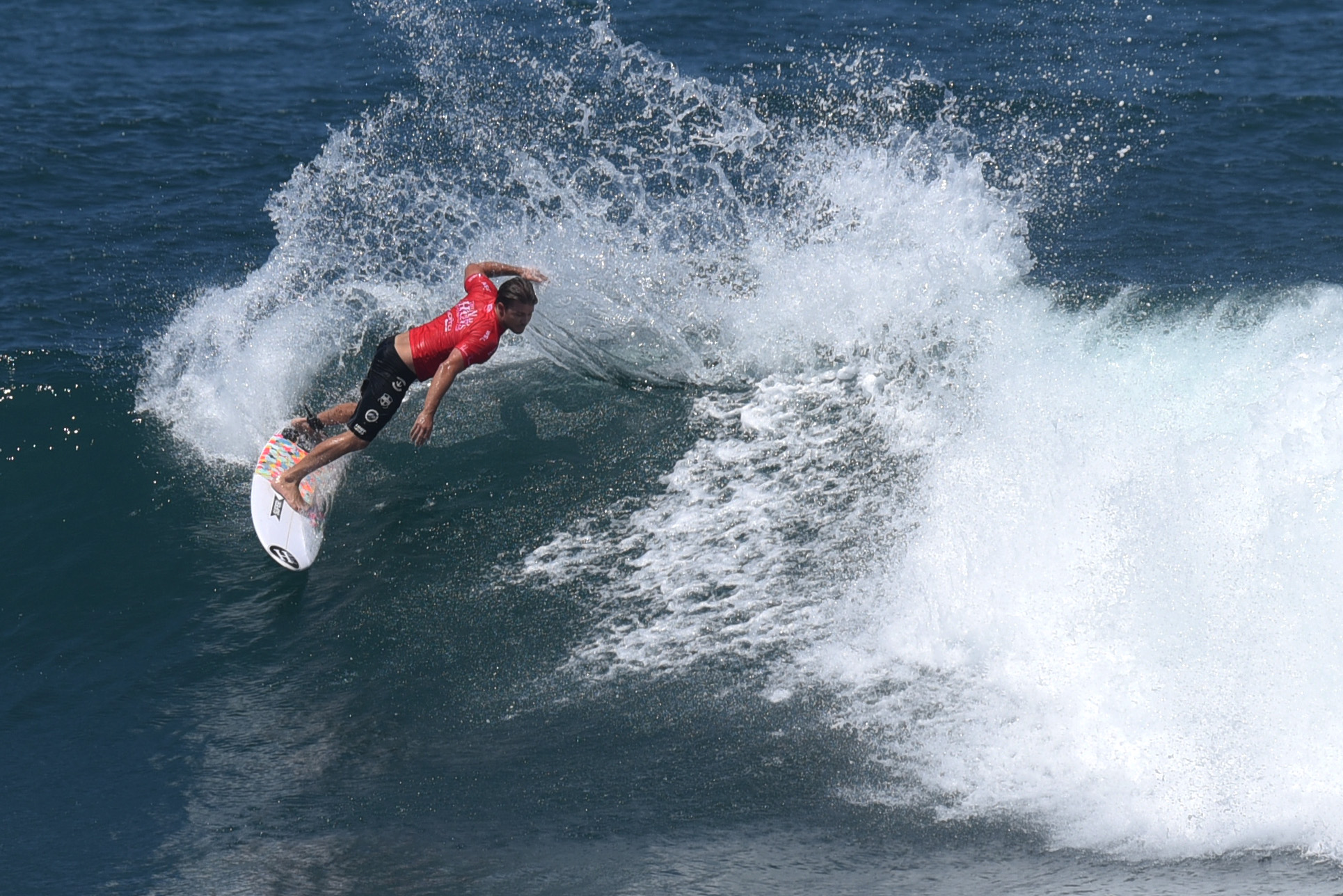 Gold Coaster Luke Hynd continued his good form from Martinique where he finished equal 3rd posting the highest single wave score of Round 1 so far, a 7.75 (out of a possible 10). Hynd’s backhand looked on-point in the deteriorating afternoon conditions and the young goofy-footer continues into Round 2.

“There was some really good walls to work with out there,” Hynd said. “The tide was getting pretty low and it was getting pretty sketchy on the inside but the waves are still better than a lot of the other QS events on tour, so I can’t complain. When the wind comes up in the afternoon they get tricky to pick so hopefully I can keep going and get a morning heat and get some barrels.”

Tristan Forras (Torquay, VIC) continued the good form of the goofy-foots taking out his Round 1 heat. Forras tried to minimise his own expectations at this year’s event and it seemed to pay off with the Victorian easily winning his heat with some impressive fins free manoeuvres.

“I just tried to fully drop the pressure I had on me that heat,” Forras said. “It’s easy to get worked up in a heat but at the end of the day we’re at Keramas in Indonesia so I should just enjoy it. I really love this comp as you have an opportunity to get really good waves.” 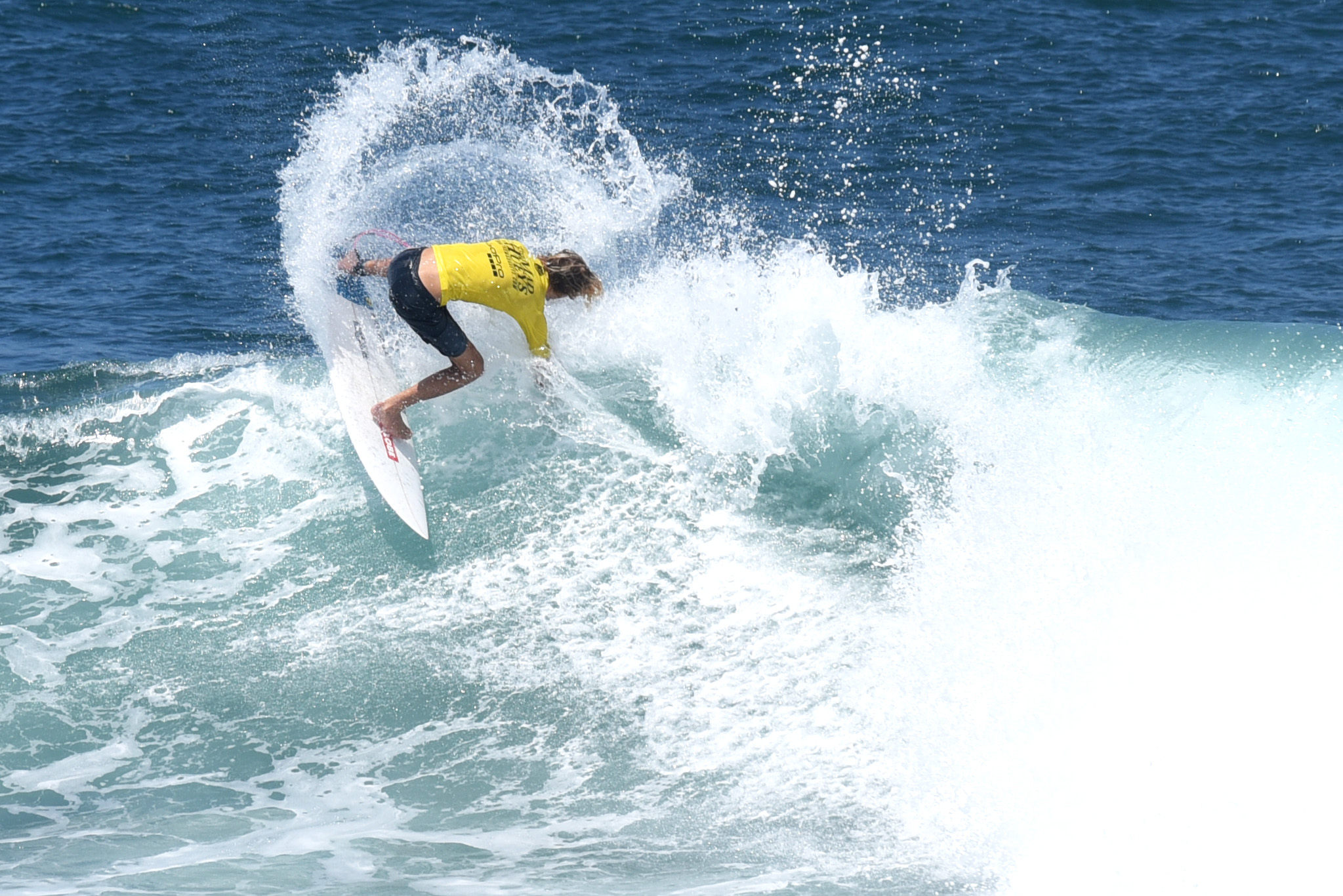 As the tide dropped and the wind came up the final heat of the day was a real battle for all involved. In the end it was Quinn Bruce (AUS) and South African surfer Jason Harris (ZAF) who were able to nut-it-out and make it through to Round 2. Harris showed great determination in only his second time surfing the wave.

“That was a really tough heat – it was quite slow,” Harris said. “I only managed to get a heat total of 9.15 but obviously it was enough, I’m stoked. This morning was the first time I ever surfed out here; it’s such a nice wave. The waves were tricky in that heat but the waves are still good and there are big scores to be had, so I look forward to what tomorrow brings.” 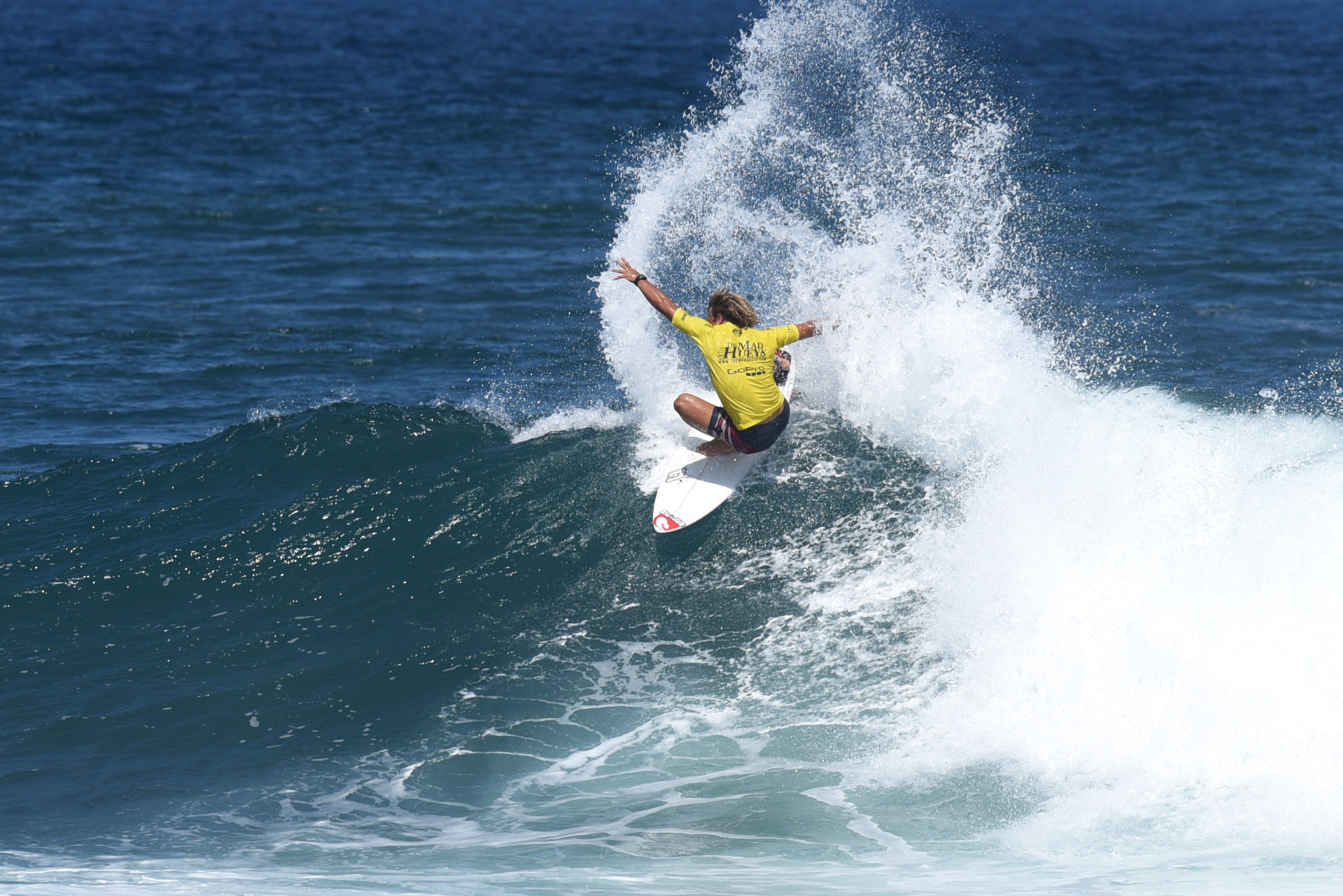